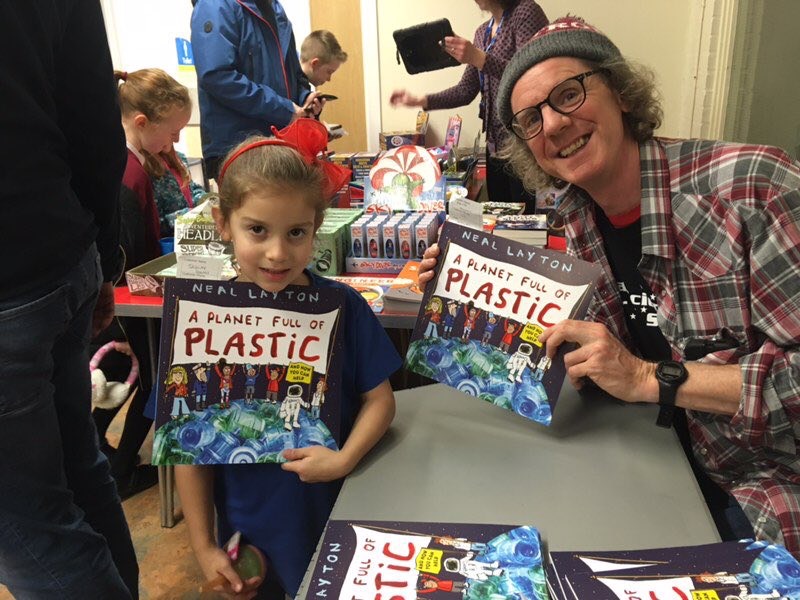 28 Jan A Planet Full of Plastic

Heswall Primary were delighted to premiere ‘A Planet Full of Plastic and how you can help’, at their annual science and eco festival, Wirral Science Under the Stars, last Thursday. The film inspired by a book of the same name, by author Neal Layton, gives strong message to all, about the harmful effects of using single use plastics. Filmed by Impossible Arts and shown on a giant outdoor screen, it was written by Heswall Primary and recorded in collaboration with 6 schools in the South Deeside Primary School Federation; Heswall, Irby, Thingwall, Barnston, Pensby and Gayton. The film charts the development of plastic from its creation by scientist, Leo Baekeland, to the devastating impact it is currently having on oceans across the world. The amusing ending, featuring an ensemble of dancing and singing Wombles, was a particularly . memorable moment for all the staff and pupils on filming day.

‘Filming day was so exciting, we filled the whole school hall with Wombles and children wearing Ocean Blue T shirts. Even the teachers were dressed as Wombles! Our Headteacher, Mr Lawrenson was Great Uncle Bulgaria!’

Heswall Primary have been working on a plastic pledge campaign, as part of the Wirral Coast to Country Campaign, started by Deeside Primary Schools. Last year, Heswall hosted a plastic pledge outdoor market in the summer and also gave every child an Ocean Blue- Take the Plastic Pledge T shirt, which the children wore on their summer holidays, to spread the message across the globe.

Heswall Headteacher, Jon Lawrenson said… ‘Our entire curriculum is built on making emotional connections to our learning. Our Eco work flows right through this curriculum. We have helped develop young agents of change, who want to care for our planet. It has become embedded in our whole school culture. This film has allowed the children to show, through artwork and song, how passionately they care about the Earth and we hope it will be shared far and wide’

One pupil said: ‘The film is sad in some places, but this is because we want people to realise that by making small changes to the way they live, they can help save the planet’